Treating gum disease is linked to improvement in overall health! According to Reuters Health in New York, there is a new study showing that people who were treated for gum disease (periodontal disease) had lower healthcare costs and fewer hospitalizations for other medical conditions compared to those whose gum disease went untreated. For this study Dr. Majorie Jeffcoat, from the University of Pennsylvania School of Dental Medicine, and her colleagues analyzed claims from two Pennsylvania insurance companies to determine if costs were lower over time for patients who had their gum disease treated. “We wanted to see if it pays from a financial point of view, to treat the disease,” Jeffcoat said. Records for 338, 891 patients found significant reductions in both healthcare costs and hospital stays over a five year period with conditions such as type 2 diabetes, coronary artery disease, stroke or rheumatoid arthritis. On average, non- dental healthcare costs for people with diabetes or stroke were about 40% lower if there gum disease (periodontal disease) was treated. For those with coronary artery disease costs were about 11% lower. Women who were pregnant and had been treated for gum disease had medical costs that were 74% lower than those with untreated gum disease. Ryan Demmer, who has studied periodontal disease at the Columbia University school of Public Health, said it’s plausible that microbes in the mouth can cause problems elsewhere in the body.

Bacteria in the mouth has been found in brain tissue, heart vessels, joints and many other parts of your body. Tooth loss and gum disease increase the results of Alzheimer’s disease. Gum disease increases the risk of head and neck cancer. Cavities are caused by acid-loving bacteria and often spread from parents sharing food with their children, and even by two people kissing. High levels of disease causing bacteria in the mouth can lead to clogging of the carotid artery and increased risk of heart attack. Poor oral health may worsen respiratory illness by promoting the growth of harmful bacteria that can be transported to the lungs. When germs reach the lungs, they can multiply and cause pneumonia, bronchitis, and aggravate existing lung diseases such as COPD. Women who have gum disease have higher incidences of breast cancer. Pregnant women with gum disease have only a 1 in 7 chance at giving birth to a healthy child of normal size, in fact most of them end up premature.

So it’s your decision, but coming in to your Austin dentist, getting your teeth cleaned on a regular basis can improve your health AND help your pocket book in the long run! 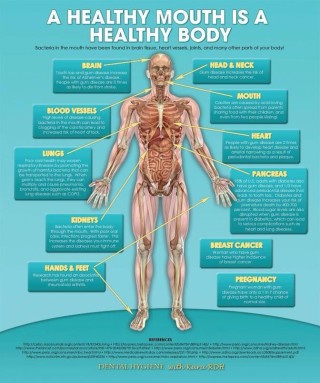